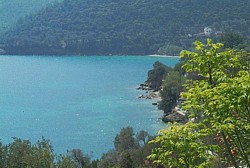 When you visit Hollywood its a must you get the map that has the celebrities homes or the tour that gives you all that. Or when you visit Austria you have to visit the birthplace of Mozart and where he worked. Just imagine going to London and not going to the Globe Theatre or otherwise called Shakespeare’s Globe Theatre. This is just a few of the numerous places one must visit: because it is a must or because there is nothing else to see or because you feel that it is a tribute to the great people who lived there.

What we all try to figure out through these visits is – what was/is the environment that gave birth to such geniuses.

Now lets bring to our attention the name Pythagoras. There isn’t a single person worldwide who has done some math and has not heard of the Pythagorean theorem. Or the name Aesop and Aesop’s Fables, like The Tortoise and the Hare, The North Wind and the Sun, The Boy Who Cried Wolf, The Fox and the Grapes, etc. And for those who are in astronomy, the name of Aristarchus rings a giant bell for his pioneering attempt to determine the sizes and distances of the Sun and Moon.

What do all these people have in common? It is the island of Samos. One Greek island in the North Aegean sea, south of Chios, north of Patmos and the Dodecanese, and off the coast of the Ionian coast of Turkey.

Now what an island that must be, that it has come up with such people, whose fame reaches throughout so many thousands of years. Wow!!!!

Samos is 472 square meters with a population of 41,500. It has fantastic country side full of pine forests with fresh water springs, magnificent mountain villages with plane trees, olive trees, immaculate vineyards, crumbling cliff top, monasteries, small fishing hamlets, rocky coves and long sandy beaches. No wonder Pythagoras, Aesop and Aristarchus were able to do what they do.

Just imagine what it would do to you as a place for a vacation. If your definition of vacation is:
– swiming in crystal clear deep blue waters
– watching majestic sunrises
– enjoying spectacular moon rising
– walking in the shade of trees
– exploring natures beauties
– wind surfing, fishing, hikking, trekking. etc.
– nightlife and every gastronomical quest
– coming face to face with humanities history and civilization

then, Samos Island is the place.

At Samos you can visit art galleries with historic relics, historical churches, monasteries, the archaic temple of the Goddess Ira and participate in local festivities with Turkey just across a short stretch of sea, at night you can see the lights twinkling along its coastline.

Probably Samos Island has an energy field that will give you what it gave Pythagoras, Aesop and Aristarchus.