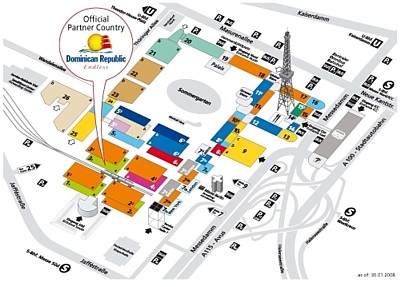 Since the end of the 2007 Summer season, many travel and tourism events / exhibitions have taken place. The one that leads the pack is ITB – Berlin which is going to take place on March 5-9, 2008 at Berlin, Germany.

There is saying that “a picture is a million words”, when even if we were to try to take a picture of ITB-Berlin it could not fit in one, two or a thousand pictures. This exhibition is BIG and international.

When I say BIG I really say Big. I don’t think that anyone could go through the exhibition and actually see everything – even if it was to walk through it. Exhibition Grounds

When it comes to International it means that each country, form all over the world negosiates on a yearly basis how much more space it can get and because the exhibition site is fixed, per period of time, each country is satisfied that it has at least what they had last year. Once a new building is put up by the organizers, the bidding starts. So we have al countries being represented. Now, the visitors come from all over the world to see everyone else. Either by chance, which is the wrong way, or by pre-arranging meetings. The truth of the matter is that deals either begin at ITB or contracts are signed on the spot. A lot of money is dealt during the few day of the exhibition.

The other good thing about ITB is that it is well planned both for the visitors it attracts and the exhibitors. I believe that another significant factor for its success is that it at the right time. This year the organizers have surpassed them selves – you can read about the innovations at our digital news paper Travelling News

So if you are “someone in tourism” you have to be at Berlin for the ITB. If they don’t see you then people start asking what has happened to you and the business.

You can just imagine what happens to the prices of airline tickets and the room rates.

We at Travelling traditionally visit ITB-Berlin every year. This year is a special year because we have an agreement with the ITB organizers that our news paper, TRAVELLING NEWS will be distributed from the ITB International Press Stand, besides being distributed from the stand of the GNTO. The newspaper’s circulation will reach a high of 12.000 copies.

So watch out for us at Berlin in just a few days.