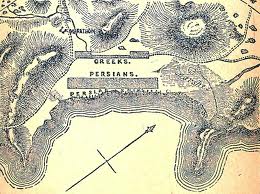 The Marathon Battle that took place 2500 years ago in Greece, between Athenians and Persians at Marathon in the greater area of modern Athens.
The significance of the Marathon Battle has had an impact on the entire western civilization, as the result could have changed the world’s history.
If the result of the Marathon Battle had been different, in other words had the Persians won, Athens would be conquered and we would not have had the Golden Age of Pericles. The Golden Age gave to the world, democracy, philosophy, architecture, arts, comedy, drama, theater, music, medicine and astronomy.

In the Marathon battle the 10,000 Greeks fought 300,000 well equipped Persian soldiers, thus preventing them from invading the then known world.
The Persians came from the sea with King Darius to Marathon, in order to destruct the Athenians and force them to leave Athens so they could attack them from a closer location. The Greeks fought a bloody battle for hours until the Persians retreated to their ships.The Greek army returned to Athens and later confronted the Persian ships at Salamis where Themistocles won a great naval battle.

Once the Marathon Battle ended, Phidippides known as the first Marathon runner, was given the responsibility to bring the great news to the Athenians. He run the distance of 42 kilometers non stop and once he announced the victory against the Persians, he died.

In honor of the significance of the Marathon Battle and the enormous physical strength to accomplish such a feat, the Marathon run has been selected as one of the important athletic events worldwide.

Once again the Marathon battle has had a great effect on the western world – the stepping stone for what we are today.