In the introductory stage of any industry, the companies involved attract the very best the workforce has to offer and in most cases, pay them prim salaries – for two reasons. First to compete with other industries that want these people and secondly to retain them. These salaries become industry norms and the industry has to maintain the whole system they created.

END_OF_DOCUMENT_TOKEN_TO_BE_REPLACED

As of this past summer Nip/Tuck (the TV show) has come to Greece. Its scheduled late, I’m sure because of the content, as if we don’t see a lot on TV these days. I am sure pages and pages worth of comments have been written about the show, so I will not act as if I am the specialist and give you my analysis. I’ll just say that, if its still running, it seems that there is a crowed that likes it (including me).

END_OF_DOCUMENT_TOKEN_TO_BE_REPLACED

The 23rd Philoxenia Intl Tourism Exhibition is in the past and has been included in history. The who-is-who of the Greek travel and Tourism industry was there along with the “may wana be’s”. They all did the classical PR, they all partied, few did business, a lot of them think they did, but what is for sure is that those who are going to go to THE event of the year, did some practicing on their selling and presentation skills.

What event am I talking about…but of course – World Travel Market. As the title implies, the world of travel and tourism is going to be at the ExCeL in London on November 12 – 15, 2007. The timing is just perfect because its either good for those markets that have just ended their high season or its good for the markets that the high season is about to start.

END_OF_DOCUMENT_TOKEN_TO_BE_REPLACED

The time of the year has come for the major annual exhibition of Greece, the 23rd Philoxenia International Exhibition. It is held in Thessaloniki, northern Greece, also known as the sub-capital of Greece – the second largest city. It is 4 1/2 – 5 hr drive or a 35min flight from Athens.

After a good summer season for Greece and following the closing of the seasonal hotels, the event is going to be something between a vacation for the professionals and a place to see friends from the travel and tourism industry. Of course we all will do business, but I think that this time its going to be more care free type of doing business rather than what happened other years were every one was pretending to be cool. Now everyone is cool!

END_OF_DOCUMENT_TOKEN_TO_BE_REPLACED 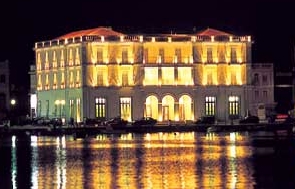 A couple of weeks ago I had gone to the Island of Tinos for a presentation on issues regarding the web promotion of travel and tourism web sites.

The way to go to Tinos is either from Rafina or from Piraeus port. We went from the port of Rafina with the new high speed boats. Its a quick ride with the boat.

Tinos is one of the places most Greeks visit, mostly for the Virgin Mary Church which is called in Greek “Panagia tis Tinou” and celebrates with thousands of people on August 15. The Island of Tinos has numerous things to see and do. It has wonderful beaches. Lots of beautiful site seeing to do. Museums. Trekking, hiking, cross country running. Local traditional things to see. The island also hosts a school of the Athens University, which deals with marble and sculpture. You won’t feel how time passed on Tinos. I almost forgot – the food is something else!

END_OF_DOCUMENT_TOKEN_TO_BE_REPLACED

Cruising throughout the world is totally different when cruising the Greek Islands. And when we say Greek Island we talk about 3000!…and Greece being the cradle of civilization, it means that each island has a history of its own.

So, a cruise really means that the cruise boat simply takes you from one island to another, were you, the cruiser has to get off the ship an tour the island and try to figure it out. Why did they build the town were they did? Why did they use the specific architecture? What are the locals habits? And what are these relics doing here? The questions are just countless.