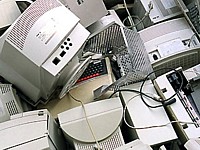 There is not a moment that goes by and we do not use a computer, as we all know it, or some gadget which is powered by a computer.

I get up in the morning using a digital clock. I open my frig and it starts beeping if I don’t close it. I get info my car – even before I put the card (key) in its place it starts computing not to mention when I turn the car on – it goes computer happy!!!

The signs on the road tell me how long it will take me to reach the major cross road. The car navigator talks you throughout the entire destination. Depending on my moods, I talk back to it – naturally without it responding to what I tell it. It continues giving the instructions as it was programed – totally ignoring what I say.

The parking lot door opens and a poll in the ground spits out a piece a paper indicating the time of arrival. The elevator that takes me to the floor I work on, also has a computer. My cell phone, just rang. I almost forgot that contraption – a telephone, a camera, a play station, a radio, an mp3, etc, the list is endless and that is called a phone.

I definitely forgot so may computers that run in the background that make our life easy or miserable. All of this in just a few hours, before the real world of jungle starts, where all the mega “this” and giga “that” start working in full power.

Its obvious that the majority of us is on the side of the court which uses all these contraption, and has to have the IQ or knowledge o be able to use all these applications, machines, appliances or what ever they are called.

There is a minority of people who are on the other side of the court. They are the ones that make all these things happen, apply, maintain, adjust, repair, etc.

This group of people are scarce, as clean water nowadays. They come from two sub-groups. The first is the self trained or the ones who have learned on the job. They are eager to learn, they hustle and have good manners – in general they are good salespeople/technicians. Their handicap is that when new technology comes their way, it takes time for them to adjust.

The second group are the ones who have had formal education. They know where to look, what questions to ask and when new technology comes by their way, they adapt quickly. Each science has its own methodology – and this group of people have it. They are not salespeople, unless they have a good idea like the people behind Google, Apple, etc., they are just good at what they do and they get the job done.

Now if I were to decide on a career path, had some logic in my brain and was good at buttons – I would seriously consider going into the area of Computer Science, Computer Systems, Computer Engineering or what ever they call it. You see, each school has its own name for it – the result is ore or less the same.

If you are in Greece the option which I suggest is an American Accredited University called City University of Seattle in Athens. City University offers a Bachelor Of Science in Computer Systems with emphasis areas: Networking/Telecommunications, Programming in C & C++, Web Design, Web Languages, Database Technology

City University operates with the quarter system, which means that you have 4 quarters a year and one can start from any quarter – October, January, April or July.

City University has a site in the northern suburbs, which is called City University North Athens Site, at 108, Papanikoli Avenue, Halandri, Athens – Tel 2108001029 (26 all over the world, 2 in Greece, with the second one in the center of Athens). Its centrally located, as it is accessible by car, bus and train and is close to the major business/commercial center which is Kifissias Avenue, Maroussi, Kifissia, etc.

Besides the BSCS program, the school also has a masters program in Computer Systems with emphasis in Technology Management and Web Development and Bachelors programs in Business Administration, Computer Systems and Applied Psychology – with several emphasis areas.

So, if you want to “change your life for good, because that is what a University has to do, then go and visit them. They will give you the whole scoop.

PS: tell them who told you.