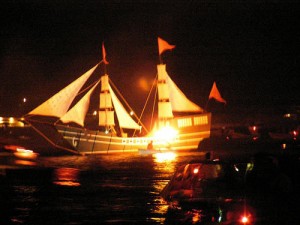 Every year, the glorious Festival of Armata takes place on Spetses Island on the second weekend of September, celebrating Panaghia Armata (Virgin Mary of the “Armata”) and commemorating the great Naval Battle of Spetses (September 8, 1822). 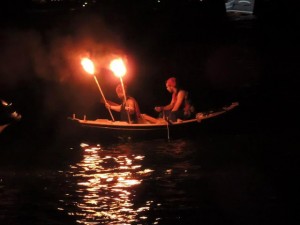 This major victory of the naval forces of Spetses against the Ottoman fleet during the Greek War of Independence of 1821, was accomplished thanks to the act of bravery of the Spetsiote Captain Kosmas Barbatsis, who achieved with his own fire ship to set the Turkish Flagship on fire and blow it up.
This act of heroism is re-enacted every year since 1931, with dramatizations of this victory culminating in the burning of a Turkish Flagship replica followed by a spectacular choreographed show of fireworks with music.
The revival of this historical event is the top of the climax of a weekly celebration with many festivities including cultural & athletic events, traditional dances, theater performances, concerts, art exhibitions and various events honoring Laskarina Bouboulina, legendary heroine of the Greek Revolution of 1821.

Also, a special mass is held at the chapel Panaghia Armata located at the Old Harbour as well as in Aghios Nikolaos, the Metropolis Church of the island.
Thousands of people from across Greece and around the world travel to Spetses Island every year to experience this breathtaking spectacle which leaves everyone spellbound but most of all touched by the Greek spirit of self-sacrifice.

Armata Festival is an epic, Once in a Lifetime Experience, full of emotions and beautiful views which accompany visitors forever.