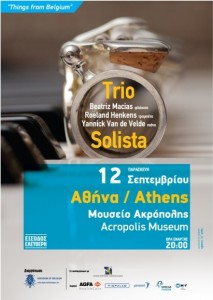 The Trio Solista consists of flutist Beatriz Macias, a charismatic performer celebrated for the beauty of her playing and for her ability to communicate directly with the audience, Roeland Henkens whose dexterity in both the modern and baroque trumpet has given him a notable reputation, and award-winning pianist Yannick Van de Velde who made his first television broadcast on the national Belgian television at the mere age of 12.

This musical event is held in collaboration with the Embassy of Belgium, within the context of this year’s cycle of concerts of the cultural program ‘Things from Belgium’.

Like every Friday, the Museum exhibition areas will remain open until 10 p.m. and the restaurant until 12 midnight with a special menu based on classical and traditional recipes, giving particular emphasis on local products from regional Greece.