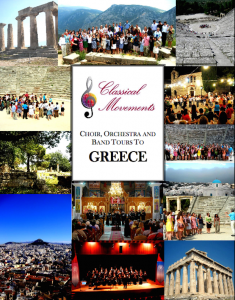 FIRST ENSEMBLE TO GIVE CONCERT AT
REFUGEE CAMP IN ATHENS

Classical Movements, Inc., one of the world’s premier concert touring companies, announces the Yale Concert Band’s summer tour to Italy and Greece from May 24 – June 4, 2016. Led by Dr. Thomas C. Duffy, this tour marks the ensemble’s return to Italy and their debut tour to Greece, which will include a performance for Afghan and Syrian refugees on June 1st in Athens at the Eleonas Refugee Camp, making them the first musical ensemble to perform at the camp. 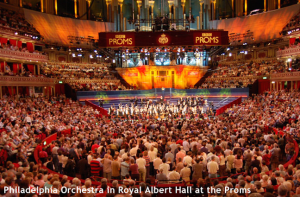 “For decades, Classical Movements has used the universal language of music to reach beyond boundaries, working tirelessly to share its powerful ability to provide transformative and healing experiences for people around the world. Under the present circumstances, we are grateful to the Greek government for allowing us to bring the gift of music to a group of remarkable individuals who have been forced to flee their homeland, separated from the comfort of their families, and torn from the lives they once knew. Together with Maestro Duffy and The Yale Concert Band, we are honored to be able to offer the refugees the sound hope during a time of discord.” 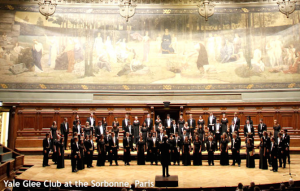 “The Yale Concert Band is genuinely grateful for the opportunity to perform exciting, contemplative, exuberant and spiritually uplifting music for audiences throughout Greece. The Concert Band is committed to bringing its music to all people, and is humbled to have the opportunity to perform at the Eleonas Refugee Camp in Athens. Its residents should not be denied the pleasure of hearing great music, nor this experience with visiting musicians – an experience so different from their daily routines. We hope that our music can help to drown out the sounds of a world gone mad with war.” 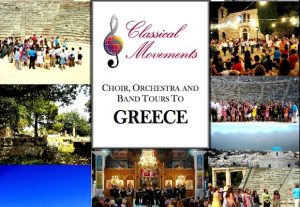 Featuring a Mediterranean themed program, highlights include works by Respighi, Rossini, the Aegean Festival Overture, two contemporary pieces entitled Dances from Crete (2003) and Hymn for World Peace (2014), and a performance of Michele Mangani’s Urbino, conducted by the composer himself.

Known nationally and internationally for its outstanding artistry and performances of traditional and unusual music in a variety of settings, the Yale Concert Band is made up of fifty brass, woodwind, keyboard, and percussion players (including a string bass).

Meet the Yale Concert Band
The Yale Concert Band’s storied history includes many distinguished accomplishments such as performances in prestigious venues like the Royal Albert Hall and St. John’s Smith Square in London. The band can also boast of a compact disc release on the Denon label (recorded while on tour in Japan), and at least 12 commissions by well-known and up-and-coming composers, including Steven Stucky, who was awarded the Pulitzer Prize in Music in 2005.

Meet the Director
The band is under the dynamic direction of Dr. Thomas C. Duffy, a composer, conductor, and Professor of Music at Yale University.  Among other posts, Dr. Duffy has served as a member of the Fulbright National Selection Committee as well as Publicity Chair of the World Association of Symphonic Bands and Ensembles. Dr. Duffy has accepted commissions from the American Composers Forum, the U.S. Military Academy at West Point, the U.S. Army Field Band, and many other bands, choruses, and orchestras.  He has conducted in Japan, Austria, the Czech Republic, England, Finland, France, Ireland, Russia, Spain, Africa, and Italy.  In 1982, Dr. Duffy joined the Yale faculty and, in 2010, he received the Citation of Excellence from the National Band Association.

About Classical Movements, Inc.
Classical Movements is one of the world’s leading concert planning and music management companies.
Clients include some of the world’s finest orchestras, including the National Symphony Orchestra, Baltimore Symphony Orchestra, London Philharmonic, and several other European and American Orchestras. They also are a leader in making concert and travel arrangements for some of the best choruses around the world, including The Collegiate Chorale, Dallas Symphony Orchestra Chorus, Pacific Boychoir, VocalEssence, Young People’s Chorus of New York City, and many more! In its 23 years, Classical Movements has worked in over 145 countries on six continents.
The company also produces the Eric Daniel Helms New Music Program for new music commissions, an international choral series, and four annual international music festivals in Europe, South America, Africa and North America. A winner of the prestigious BCA10: Best Businesses Partnering with the Arts in America given by Americans for the Arts, Classical Movements strives to spread global understanding and unity through the universal language of music.