Athens Biennale OMONOIA resumes its action with September events. Artists from Greece and abroad refocus on Omonoia square, exploring diverse ways of interaction with the Athenian public. All the projects have as a reference point the venue of Bageion and the venue opposite of Varvakeios Market, which the Municipality of Athens has offered in the context of the co-organization of the Athens Biennale OMONOIA. 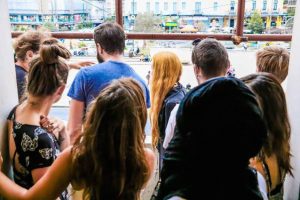 September events start with Contemporary Art Showcase Athens (C.A.S.A.) project ACTS OF ENGAGEMENT, where artists and researchers from Greece and abroad explore in a ten-day workshop the role of art out of traditional art spaces and how audiences can be involved into action in this political context. The results of the ten-day workshop will be exhibited in Bageion on September 17 and 18 and will be presented by the participants in the end of the exhibition. This project is curated by James Simbouras with the participation of the following: Mohamed Abdelkarim, Vilelmini Andrioti, Giannis Antoniou, Emilia Bouriti, Thomas Diafas, Madeleine Dymond, Camille Kaiser, Athina Kanellopoulou, Alexandros Kiriakatos, Jussi Koitela, Arjuna Neuman, Andreas Papamichael, Anna Papathanasiou, Javier Gonzalez Pesce, Erika Pirl, David Gregory Rees-Thomas, Nikos Stathopoulos, Thodoris Trambas, Era smia Tsipra, Camilla Paolino, David Esteban Romero Torres, Yvette Vasourkova. 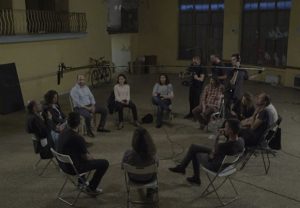 Visual artist and film director Robin Vanbesien takes over the venue presenting assembly for an Oresteia (2016, 31′). This is a documentation of a collective conversation that took place at Green Park Athinas on April 19 2016, with the representatives of several solidarity organisations in and around Athens. The piece is a prelude to his forthcoming film Vision for a Citizen, a fictional story based on his research into grassroots solidarity movements in Athens. The screening will be followed by a discussion between the actors of the film, representatives of the grassroots and the public on September 21. 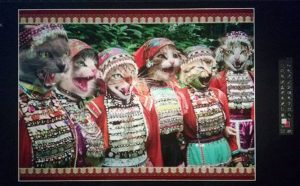 Finally, Avtonomi Akadimia also resumes its lectures and seminars in the context of Athens Biennale OMONOIA, at Varvakeios. Avtonomi Akadimia launches the Winter Semester with Deep Artists’ Talks, offering a new, intimate relation between public and art. A deep talk with Vilelmina Andrioti about her experiences as an artist working with refugees will begin Universitas, an artistic research project that develops a practice-based model of university organization integrating a mutual education by both host countries and “refugees” by Avtonomi Akadimia and AthenSYN. Another artist’s talk will be given by Martina Schumacher, the renowned master of expanded paintings made of extravagant and technologically challenging liquids invented by the artist herself. Last September event will be the talk of the artist Michael MacGarry, who will present his sculptural work, ques tioning systemic paradigms.

assembly for an Oresteia | Robin Vanbesien