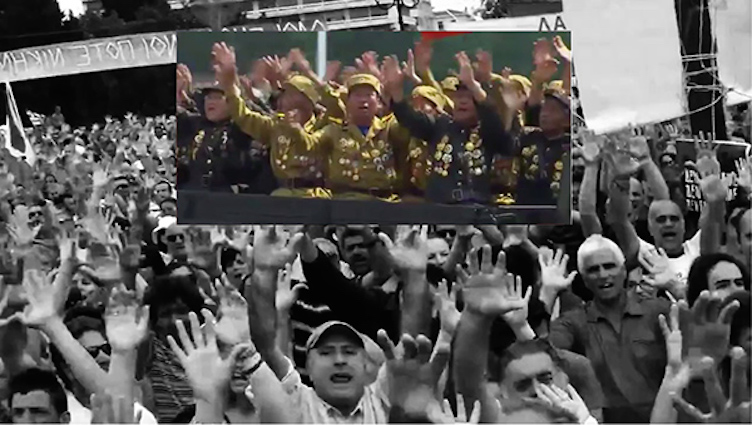 The Athens Biennale OMONOIA presents The Meeting Room
an extended component of HOW Assemblies Matter?
and an ongoing collaborative research project by Jenny Marketou,
at the Varvakeios venue, on 8-18 December 2016.
Free and open to the public.

The idea of The Meeting Room emerged as an outcome of the two-day public assemblies event HOW Assemblies Matter?, the ongoing translocal research project by Jenny Marketou which took place at the National Polytechnic School of Athens and the historic M.A.X. and Averof amphitheaters on 21-22 October 2016. The hosted assemblies and performative talks instigated numerous discussions; about the practice of “assembly” as a platform for inquiry, action, reaction, civic participation, collective intelligence and as a starting point for an “art of being many”.

The Meeting Room of HOW Assemblies Matter? features unedited, excerpts of videos and live streaming documented during the two-day assemblies, as well as an artist’s book, and a dossier with short statements, scripts, images, texts and other kind of contributions and afterthoughts by those who participated in HOW Assemblies Matter?.

Jenny Marketou’s video/essay Assembly in No Particular Order, 2016 premieres in Athens during the evocative The Meeting Room . The work which has toured at museums in Spain and Portugal, consists of a series of appropriated archival films and images found online on media networks recent records, of distinct historic “assemblies” and protests around the world and in Greece; visual by-products of radical political times. The video is accompanied by a digitally manipulated audio, composed by a mechanical female voice stitched together with interviews conducted by the artist in US and Greece. These interviews with activists, writers, thinkers, anthropologists, art historians and architects are mixed with critical texts and fictional narratives.

The Meeting Room continuous to be informed by and aims to continue revisiting “the art of being many” as instigated during HOW Assemblies Matter?. It is complemented by events that activate, encourage and facilitate new forms of being together.

On Friday December 16 and on Saturday 17 the public is called to bring questions and topics, which are pertinent to them and share them in an open debate with the artist and other members of the audience. During that time the public is also encouraged to read extracts from literature, perform speech acts, poems, music, discuss headline news and environmental issues, gender politics, art, fashion.

Jenny Marketou aims for The Meeting Room to become a contemplative and open space for playful experimentation and for it to act as a platform where the future of activist and socially engaged art becomes more meaningful under the current global cultural and political climate in Greece, EU and North America.

This project is organised by the Athens Biennale OMONOIA.

This project is made possible with the support of Outset Contemporary Art Fund (Greece).