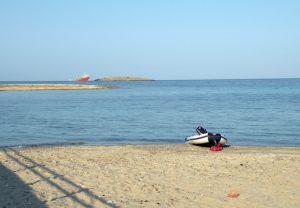 Kythera, the idyllic birthplace of Aphrodite.
A window in the middle of the Mediterranean.
Walk in the paths of the heart and secret loves.

Kythera is located between Crete and Peloponnese in southeast Greece and is nestled in the waters of three seas: the Ionian Sea, the Aegean Sea and the Libyan Sea.  Many peoples and civilizations have set foot here and left their mark on this blessed land, making Kythera a crossroads of civilizations.

According to the myth of Hesiod, the goddess Venus (Aphrodite in Greek) was born in Kythera.

Gaia (the Earth) wanted to punish her husband Uranus (the Sky) for forcing her to keep her children within the bowels of the Earth, so she called on them to help her get rid of their “wild” father. Cronus took a weapon and severed his father’s genital organs, which fell into the sea of Kythera. The foam thus formed traveled by force of wind to the island of Cyprus, where Aphrodite came forth.

Kythera is a mountainous island with an area of 284 km² (equivalent to that of Malta) where one will find many valleys, countless beaches and villages perched on the mountainside.  Kythera’s countryside and its magical landscape are the two main elements that will inspire visitors to love this island and – who knows? – to stay here forever.

It is characterized by a Mediterranean climate with mild temperatures, but the wind often blows and the air is quite humid. The island also has a rich wildlife and serves as one of the main routes for migratory birds.  Thanks to the many rainfalls in the wintertime providing large quantities of water rivers flow throughout the year everywhere on the island.

Today, Kythera boasts a population of 4,500 spread out in 64 villages of varying size.  Most of these are located inland and connected through an extensive network of roads. Kythera is a municipal corporation that depends administratively on the region of Piraeus.  The majority of the inhabitants are involved in farming and tourism.  Thanks to the island’s virgin nature there is a large production of organic products, the most representative of these being oil and honey.

Visitors will have the opportunity to admire classical antiquities, 300 churches from the Byzantine era, as well as bridges and schools from the British era.  The museums, castles and “Kythera’s Historical Archive” will take visitors back to another time and introduce them to hidden treasures.  In the caves, the earth can hear the echo of man’s secrets.

Kythera is an idyllic place, where the magic of nature prevails and where dreams flow endlessly in front of the eyes of those who set foot here.  Visitors often fall in love with the island and decide to stay here forever, in search of a different life.